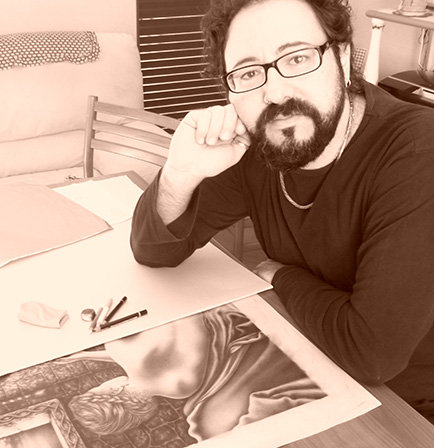 Alessio Serpetti was born in Rome in 1975. He began his passion for drawing early and at the age of 9 started studying graphic and pictorial techniques with Carlo Marcantonio (1923 - 2003) first at the Academy Prenestina of Cimento, then at the Art School “Casa Romana”, dedicating itself in the first half of the Nineties to a series of Allegorical portraits which leads, with profound introspective capacity, above all to the female image.

After the artistic Maturity (Art Institute of Anagni), he obtains the Academic Diploma of Scenography with Gaetano Castelli at the Academy of Fine Arts in Rome (with the grade of 110 e lode) and inaugurates the cycle of “Views of Scene”, whims scenographic with an ancient flavor and an enchanted atmosphere realized in black and white with the traditional charcoal technique: these works are protagonists of the Personal exhibitions presented in 2010 in Tarquinia (Etruscopolis Museum) by the famous art critic Paolo Levi, about which he says: «Alessio Serpetti with his white and his black makes painting. Not only that, white/black is sometimes more suggestive than color because it is more intimate, and these works are intimistic. They are in the dimension: if they were poetry, we would call them sonnets. And they are deeply suggestive. In him there is a tradition exquisitely linked to the scenography and in these compositions, since we do not have theatrical development but only the scenographic apparatus, he gives us a metaphysical, detached, objective world: his stories are without human figures, they are micro- stories in which we have the reflection of an artist who makes chamber music for optical listeners who meditate sign after sign». (P. Levi, 2010).

Subsequently, as he obtains the qualification for teaching Artistic Education and Drawing and Art History (he has been teaching since 2008), he intensifies again his pictorial and graphic activity, turning mainly towards the past: mostly inspired by the symbolist and surrealist poetics, the pre-Romantic “Visionaries”, the Pre-Raphaelite figures, the light treatments and the representations of the vanitas of the seventeenth-century Masters, he oriented his research through a surreal, dreamlike and enigmatic symbolism, starting the collection “The Art of the Dream”. According to Paolo Levi, «the path that leads us from visionary pre-Romantic painting to the present day investigating the most hidden and mysterious aspects of the human soul, crosses the work of Heinrich Füssli (representation of the nightmare), William Blake (mystical visions), Gustave Moreau (spiritual symbolism), Alberto Martini (esoteric pre-surrealism), up to Alessio Serpetti (Apollonian onirism). A path that wants to escape from reality by seeking, through the dream, a need for spirituality that leads to “Paradise lost”». (P. Levi, 2017). These complex compositions, rich in symbolism, in which they coexist visions of winged creatures or metamorphoses, female figures, masks and statues, candles, goblets and mirrors, immediately arouse the attention of the art critic and philosopher Daniele Radini Tedeschi who in 2011 he chooses him among the best artists of the contemporary scene for various international events and for some volumes of scientific nature – realized with the contribution of the University of Rome “La Sapienza” and adopted in 2012 as didactical books by the Department of History of Modern Art – in which he writes: «The allegorical value of which his works are full is obtained thanks to the mixture of theatrical elements (masks) and dreamlike elements (they allude to the sleep of reason) and in this way a black surrealism is created. The female figures, outlined with a delicate, light stroke, are recurring and useful to reveal the hidden meaning of the plot. The masks reflect an unnatural, distorted world which is hostile to the living one, while lighted candles and goblets allude to liturgical meanings». (D. Radini Tedeschi, 2011).

After the Personnel of Vicenza (Valmarana Braga Palace, 2015), Bologna (Wikiarte Gallery, 2015) and Spoleto (Leonetti Luparini Palace, 2016), he deepens the engraving techniques with passion (above all etching and aquatint) to outline poetic visions between classical and allegorical, that includes in the collection of “Arcane Nocturnes”, «with which gives us further metamorphic fantasies, or condensates of plant, sculpture and figure elements , not free of contamination». (G. Di Genova, 2017). With these works, in 2017 he wins (ex-aequo) the Prize of the 5th Biennial of Contemporary Engraving “Città di Bassano del Grappa”; while as part of the next edition (6th Biennial of Engraving, Bassano del Grappa, 2019) he is invited to hold a solo exhibition in the halls of the Civic Gallery.

Invited to the 42nd, 44th and 45th Sulmona Prize (2015, 2017 and 2018), he participates in the Biennials of Chianciano (2011), Rome (2012), London (2013), Barcelona (2015), at the Triennial of Rome (2011, 2017) and other important international events curated by distinguished critics such as Paolo Levi, Vittorio Sgarbi, Giorgio Di Genova, Daniele Radini Tedeschi, Elena Gollini. In 2019 he exhibited in Venice (San Servolo Island) in the context of the 58th edition of the Venice Biennale (Biennale Arte 2019) and held a solo exhibition in Sesto Fiorentino (La Soffitta - Spazio delle Arti) where his works "dialogue" with those of the Masters of European Historical Symbolism active between the end of the 19th and the beginning of the 20th century (Klinger, Welti, Hermann, Greiner, Guerin, Kleen, Martini, etc.). Since several years he has exhibited in prestigious museum halls and institutions, Villas, Castles, historic buildings and galleries in Italy and abroad, such as the Museum Gipsoteca Canova of Possagno; the Civic Museum of Bassano del Grappa; Valmarana Braga Palace of Vicenza; Zenobio Palace, Giustinian-Faccanon Palace and the San Vidal Art Center of Venice; Pepoli Campogrande Palace of Bologna; the Casa di Dante Museum and the Bellini Museum in Florence; the Art Museum of Chianciano; Leonetti Luparini Palace of Spoleto; Orsini Palace of Bomarzo; the Museum Complex Sale del Bramante, the Monumental Complex of Dioscuri al Quirinale and the Basilica of St. Paul Outside the Walls in Rome; the Estensi Stables of Tivoli; the Maschio Angioino of Naples; the Ducal Castle of Corigliano Calabro; Villa Malfitano Whitaker of Palermo; Villa Palagonia of Bagheria; the Civic Museum of Modern Art in Monreale; the European Museum of Modern Art of Barcelona; the Municipal House of Culture in Coimbra; the Galerie Thuillier in Paris; the Chelsea Old Town Hall, the Pall Mall Gallery and the Royal Opera Arcade Gallery in London; the Vernadsky Museum of Moscow; the Asmalimescit Art Gallery of Istanbul.

Some of his works have been published on catalogs archived in the Libraries of the Metropolitan Museum of Art (New York) and Tate Gallery (London) and exhibited together with an unpublished painting of Caravaggio (Rome, Maffei Marescotti Papal Palace, 2013) and original woodcuts by Dosso Dossi and Gustave Doré (Bomarzo, Orsini Palace, 2016). His works are present in Italian and foreign public and private collections: in Italy at the Gabinetto of drawings and prints of the Civic Museum of Bassano del Grappa (Vicenza), at the drawing and printing Fund of the State Library of the National Monument of the Greek Abbey of San Nilo in Grottaferrata (Rome) and in the permanent collections of the Fondazione Roma at Palazzo Sciarra (Rome), of the Pinacoteca of the Convent of San Silvestro in Monte Compatri (Rome), of the Modern Art Museum of Alto Mantovano in Gazoldo degli Ippoliti (Mantova), of the "Marco Moretti" Civic Art Gallery in Civitanova Marche (Macerata), of the "Giuseppe Sciortino" Museum of Modern Art in Monreale (Palermo); abroad at the Town Hall of Constance (Germany), the Vernadsky State Museum in Moscow (Russia), the Art Gallery of the Faculty of Fine Arts in Luxor (Egypt).